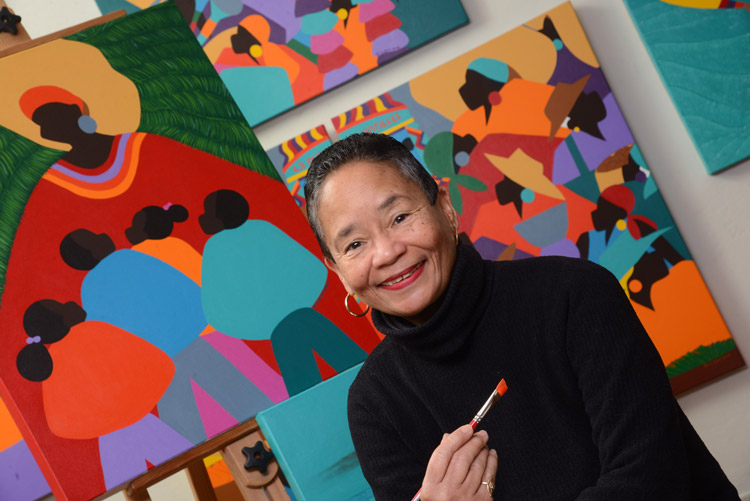 If her name does not ring a bell, her work will. Do you remember the first Kwanzaa stamp or the book cover for “Waiting to Exhale”? Yes, the HBCU Lifestyle Podcast was happy to welcome that Synthia Saint James to join us for Episode 35. The visual artist whose work has been described as ebullient, bold and joyful, joined us to chat about her craft and career. Her new Kwanzaa stamp will be issued in October 2016.

Dr. Saint James, who received an honorary Doctor of Humane Letters from St. Augustine’s University, is an award-winning and widely respected visual artist. Synthia Saint James’ career began in New York City in 1969 when she sold a painting to a co-worker. That sale eventually led to artwork that has been displayed by the U.S. Postal Service, the Center for Disease Control, Essence Communications, the National Chapter of 100 Black Men, the International Association of Black Professional Fire Fighters, Maybelline, Coca Cola USA, Barnes and Noble, Susan G. Komen for the Cure, and the House of Seagram.

Her work has been commissioned for several public displays. Dr. Saints James’ vibrant colors can be seen at the LA/Ontario International Airport, the West Tampa Library, the Los Angeles non-profit organization WORKS, and the Capitol Area East End Complex in Sacramento to name a few places. Her work has also been included in international group exhibitions in France, Sweden, Canada, Poland, and South Korea. Dr. Saint James’ art is displayed in embassies in Venezuela, Ghana, Cote d’Ivoire, Nigeria, and the Republic of the Congo.

Naturally, Dr. Saint James has been highly recognized for her work. She earned an induction into the National Association of Women Business Owners, a 2010 Trumpet Award, an award for Woman of the Year for the 26th Senatorial District (Calif.), an AT&T Entrepreneur of the Year award, and a 2012 NAACP Image Award nomination in addition to a distinguished list of other honors and recognition.

Synthia Saint James work is not limited to visual art, however. She is also a speaker, author, actor, and educator. She lights up when speaking of the nearly 20 children’s books she has written and illustrated. Dr. Saint James is a fixture at colleges and universities across the country including several HBCUs. She has visited the campuses of Kentucky State, Voorhees, Morgan State, Tennessee State, Fisk, Bennett, Rust, Spelman, Dillard, Langston, and Winston-Salem State. She has been an artist in residence at Albany State, Alabama State, Cheyney, the District of Columbia, Harris-Stowe State, and of course St. Augustine’s where the Synthia Saint James Fine Art Institute was established.

To learn more about Dr. Saint James’ distinguished career and to view her work, visit www.synthiasaintjames.com.

Get this podcast on your phone!